It has been a long time since I wrote you a letter about bad purchases inspired by deep discounts. I’ve been trying to avoid this because I have a feeling it wounds both of our vanities; yours because of the ongoing problems that discounting presents for the future of Polo; mine because it shows what a cheap, impulsive maniac I am.

So let’s get the dirt out of the way first. I bought these two pieces of outerwear late last January at deep, irresistible discounts. I paid a little over a hundred dollars for the leather flight jacket, which is close to 90% off the MSRP. Ok, so you get it. But this isn’t a letter about sales: it is about rules. What is truly astounding about these jackets, other than the discounts, which I will repeat were amazing, is how both managed to break several rules simultaneously.

One thing I’ve learned writing you these letters, is that there are “style rules” and then there are rules of conduct concerning how we buy and wear clothes. A style rule is something general, an injunction to avoid wearing black for example. A rule of conduct would be an injunction to stop buying outerwear, because really, how many pieces of outerwear does a person need?

So I violated both rules, one general,  the other very specific. I think the injunction against black can be explained by contrasting and comparing the way the leather bomber gets styled in black and brown: 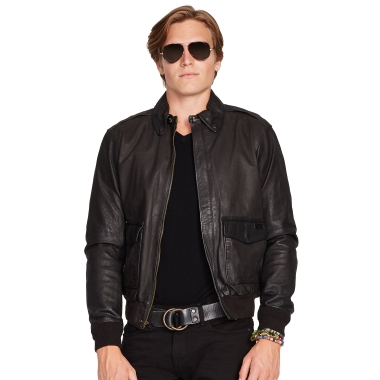 Brown is just a little more my speed.

Over time, the menswear enthusiast tells himself many lies; lies about origins, about utility, about influence. These lies justify bad purchases, aimless Googling. These lies justify a closet full of under-worn outwear. One of the truest lies we tell ourselves, is that menswear is all about details. It would be true for me to wax eloquent about how different these jackets are; about the Englishness of my quilted Barbour contrasted with the sleek Euro-money vibe of the black one; to go on at length about the military feeling of the A2-style leather bomber compared to the mid-century motorcycle style of my vintage horse hide jacket. It would also be equally true to say I own two leather jackets and two quilted jackets and most people couldn’t be bothered to differentiate one iteration from another.

Making personal rules is as aspirational as all of the purchases enumerated above. We imagine some better version of ourselves and know there are concrete steps we can take to make us that person. So, to use an example drawn from another galaxy in the universe of my personal vanity, if I want to be the kind of person who reads a hundred books a year, I have to – as a rule – read two books a week. If I want to be a person who is ruthlessly honest about the compulsions that drive his less rational behaviour, I might as a rule remind myself before making any purchase that the apparent ease of consumerism has not only not gotten me closer to being this ideal version of myself, but has actually turned me into a compulsive moron with a vast collection of outerwear and little else to show for himself.

That’s a cold wind – and one that I have yet to find a jacket that could shield me from.