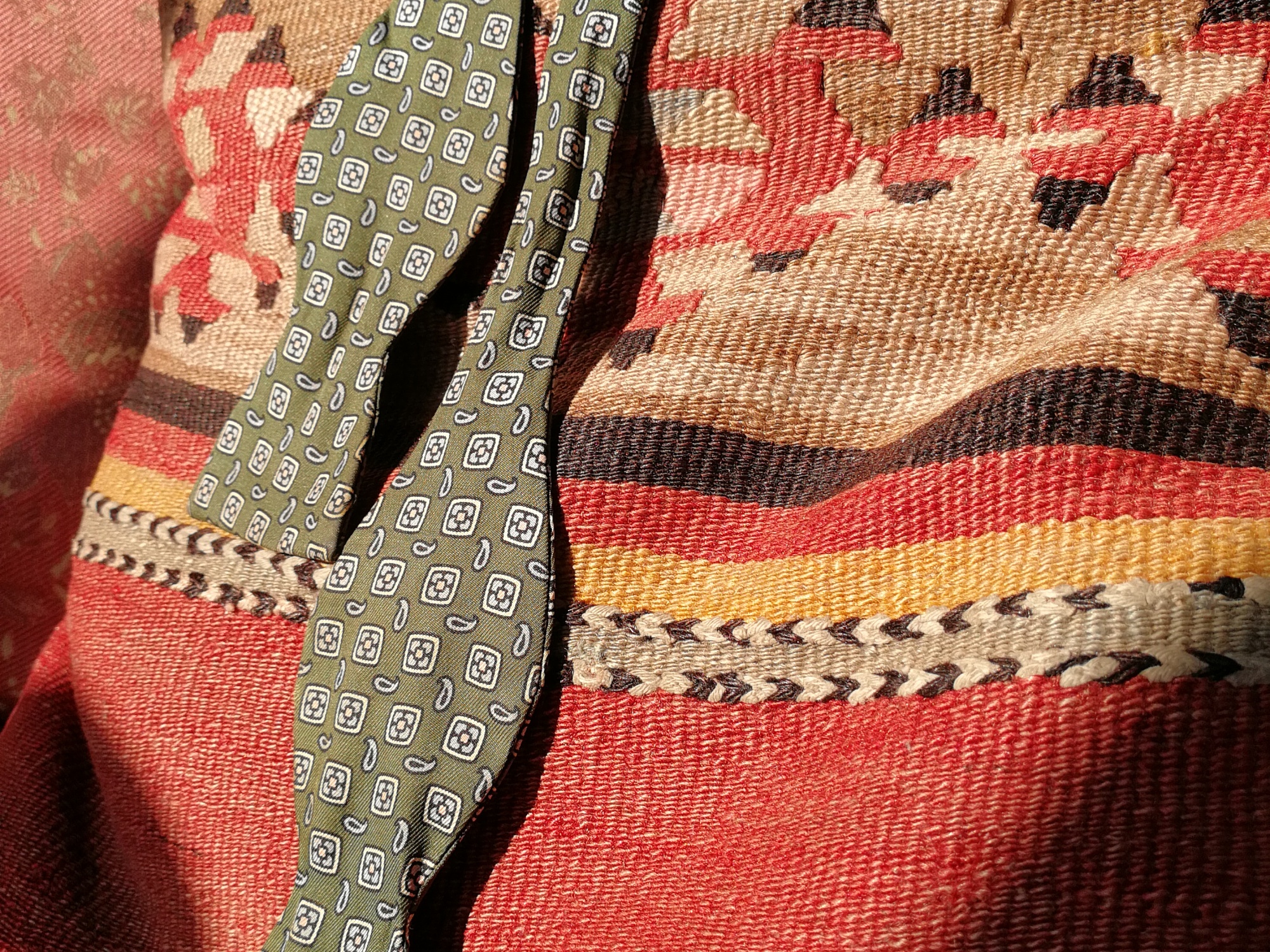 Yesterday was national bow tie day. You’ll note that I haven’t capitalized this bullshit holiday as I’m reluctant to grant it dignity, which I guess I’m sort of doing by even writing to you about it.

I only know about this “day” because of a few flitting images that crossed my Instagram feed. It is the same way I know that the Saturday preceding it was national dog day (again, please note the lack of capital letters). I don’t know if the proximity of these dates to one another is coincidental, but a quick search online yields more than a few pictures of pups in bow ties.

It somehow seems appropriate that the bow tie, a truly exceptional-looking bit of menswear, should end up as little more than a foil for social media novelty.

I rolled my eyes when I saw that it was national bow tie day, thought about how if I wore bow ties on a regular basis I probably would have made a point to not wear one that day, and went back to my general state of undress. But something lingered in the back of my mind: a comment I read somewhere from a man who had sold ties his entire life. He said that despite tie sales in general being on the decline, sales of bow ties were increasing and increasing in a big way. He couldn’t quite figure out why this was.

A report at bowtieaficionado.com offers a few guesses – Doctor Who, Mad Men, a line backer, metrosexuality – that all seem to fall short of the mark. There is something about these answers (the article is a couple years old – but that isn’t it) that just doesn’t feel discursive enough. It reads clothes as a simple cause-and-effect proposition; it doesn’t diagnose; it doesn’t condemn.

Why do I long for those types of answers? Why is my impulse, when an article of clothing I love gets some general love, to scorn, to roll my eyes, to hate?

I don’t want to drag Freud and marginal difference back in here or invoke French semiology (a subject, to be honest, I don’t really understand), but if clothing isn’t discursive then I’m in big trouble. It means that an assumption I’ve used to bolster my voracious consumerism is totally empty.

So we could formulate it like this: the tie itself has become, for the non-professional class of dressers, a once or twice-a-year phenomenon. In a universe where the conventional tie dominated the discourse, the bow tie was the terrain of the eccentric, the wonk, the man apart. In a world geared to a single, spectacular wearing it becomes the terrain of the bold and the showy. The meaning of the bow tie – essentially a gesture of individuality with a healthy mix of curmudgeonly antiquarianism – has been rewritten by the larger discourse it exists in. The bow tie still speaks, but the conversation has changed. It says “look at me.”

And here we come to an impasse. This is the moment where I realize that if I think it is possible to tease meaning out of clothes, it is possible that clothing can tease meaning out of me. Why would I work so hard to come to the conclusion that bow ties are a symptom of the vapid narcissism of our age? Why not just be happy that something that looks good is popular again? Why prefer the philosophy undergrad answer to the one from the world of marketing?

The truth is, I would like to think that if I wore a bow tie I would be aligning myself with some of the dishevelled valour of a Churchill or the visionary precision of a Corbusier, while I am unable to grant any other person in the world the same levels of thoughtfulness, historical awareness or breadth of knowledge I have. If wearing a bow tie is one form of narcissism, this letter is another—and far worse.